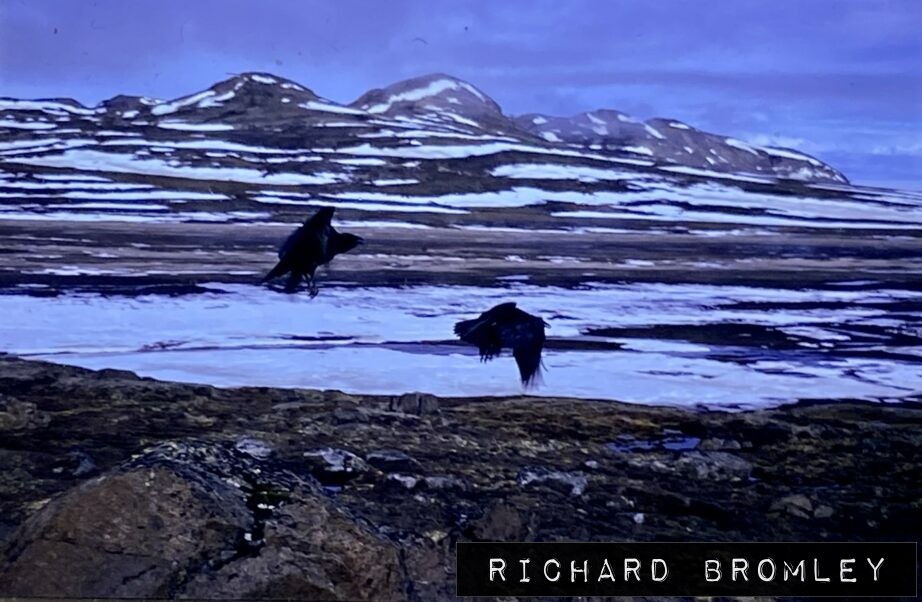 At nearly midnight the helicopter returns unexpectedly and takes Eckart Håkansson and Claus to Gurreholm. It leaves at 1 am, I sleep from about 1:30.

Sleep til 7, then pack so we are ready to leave. However, at breakfast at 7:30, Christensen tells us that we shall fly “earliest tomorrow”.

After lunch Ulla Asgaard and I go for a walk in boots, slowly down the runway. We find a snow bunting nest in cranny under bridge. At the far North-West end at the “garage” we find the baby hare, still sweet but more lively now, running clumsily about among oil drums and cylindrical oil tanks.
A short distance away we find a dead “blue” (actually brown) fox and find a plastic bag in the big shed to put it in. A white adult hare is eating nearby, so we stalk it quietly and get to within a few yards of it. Then slowly climb the knoll of dolerite to the north to see the view.

Two musk-ox skeletons, one a rather recent bull corpse, on the way.
Returning, a turnstone comes tolerably close to scream at us. Find a rather large and old egg, brown with large black spots and lines (photo). Lots of old nests of grass in the heather but none in use are seen. We pick up the fox corpse and get home, Ulla’s feet very painful and numb at 5.

Finn Surlyk appears for the first time at supper at 6, having had a visit from the handyman with a bottle at 3 last night!

Falling asleep over our books we decide to go for a walk at 8 down to the “Dump” where we haven’t yet been. Past a sledge-team of dogs which howl excitedly and hopefully as we pass them, we find a wrecked “Jeepadan” – 4-wheel drive American horror with still blown-up tyres and much less of a wreck than the worst Land Rover which still runs – its chromium-plating is hardly rusty.

Lots of other wasted things also on the tip. Glaucous Gulls have been used as target practice.

After coffee-at-9 I decapitate raven and ceveral glaucous gull corpses – find the heads, which belong to the musk-ox skins all over the place, just behind the big store hut, full of fly-larvae.

Pack our things again since we are told to expect a flight first thing tomorrow! Still no sign of the helicopter by the time I am asleep at 11:30. Ulla reads a novel borrowed from Surlyk into the “night”.

Tracing maps, and a wild goose chase - Greenland 1970
Up at 9. All are up, except Peter who had a party with the locals until 5....
Visiting an abandoned mine in a Land Rover - Greenland 1970
Up at 8. Sunny and warm. After breakfast I photograph dogs and pups. Find ...
News article - Real geology on Rhodes
Today the national Danish newspaper "Berlingske Tidende" has a long articl...
We are on a DC-6 to Greenland - 1970
From midnight onwards it rains rather hard and continuously - the first fo...
A polar bear skull, red with flesh - Greenland 1970
Up at 7:15 to find the fog rising beautifully over the fjord last night, h...
Post Views: 27